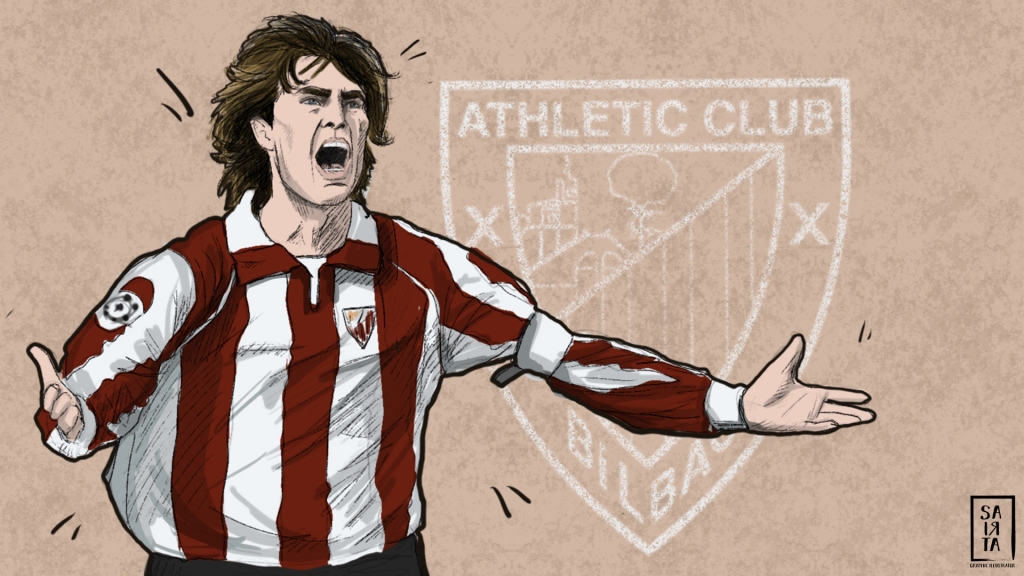 The nickname ‘El Rey León’ was given to Athletic Club’s attacking-midfielder Julen Guerrero in part as a reference to his floppy, blonde locks, but mostly it’s a recognition of his loyalty to the club he loved and his prowess as a player. If you were to head into the city of Bilbao and ask anyone between the ages of twenty-five and forty who their favourite ever Athletic player is, the response would most likely be swift and unambiguous, Julen Guerrero.

Like most of the legends to have passed through the halls of Lezama, Julen was invited for a trial at an early age. The youngster, from the working class borough of Portugalete, started his career at Athletic at the tender age of eight. After rising through the ranks, the blonde bombshell made his debut for the second team, Bilbao Athletic, at eighteen years of age. It was about as good a debut as one could wish to have, with Guerrero scoring a hat-trick whilst dismantling Compostela.

He would play a further twelve games with the ‘B’ side before senior side coach Jupp Heynckes saw fit to take a gamble on the youngster, giving him his La Liga debut against Cádiz. He would go on to play thirty-six more games and net ten goals during the 92/93 season.

His model looks, mild character and undoubted ability meant that young Julen became a superstar, not just in the Basque Country but throughout Spain. As Sid Lowe put it: Julen was the kind of person that your mum would fancy just as much as your sister did.

All the attention could have been quite detrimental to such a promising player, but in the case of Guerrero it had a minimal impact on his on-field exploits and, more importantly, his composed demeanour allowed him to stay clear of trouble. In fact, in his second season his figures improved.

As a player he was tidy in possession, had an eye for a pass and liked to finish attacking moves which he himself had started. Trademark smart, late runs in to the area saw him finish the 93/94 campaign with a career high eighteen goals and the Don Balón award for best Spanish player. In addition, he helped propel Athletic up the table into fifth place and European qualification for the first time in five years.

His performances also caught the eye of Spain’s ex-Athletic manager Javier Clemente, who wasted no time in bringing the nineteen year old Bilbaíno into the international fold. He made his debut in January 93 and became a key part of Clemente’s Spain, gaining forty-one caps and thirteen goals, whilst receiving call ups to three major tournament squads: World Cup 94, Euro 96 and World Cup 98.

His exploits did not just gain him domestic attention. His match-winning performances and status as Spain’s superior attacking talent saw clubs all over Europe take a keen interest. His ability coupled with the obvious commercial opportunities offered by the boy-band like mania that surrounded him turned him into one of the most desired players in Europe.

It is reported that Inter Milan, Bayern Munich, Manchester United, Barcelona, Real Madrid and others made enquiries as to signing him, but he rejected all overtures. The most significant off-field moment of his entire career came in 95, when Real Madrid, prepared to break the national transfer record, paid his release clause in an attempt to sign him. Guerrero, like all offers beforehand, duly rejected the proposal, preferring instead to stay with his boyhood club.

In return for his loyalty, the president at Athletic, seeing Guerrero as the future of the club, handed him an exceptional contract. It would not expire for ten years and guaranteed that Guerrero would be the Captain and most well-paid player in the squad until the moment he decided to retire. Additonally, it stated that upon his retirement he would automatically be given a top coaching job at Lezama.

The contract was designed to tie the most talented player of his generation to the club he loved but it ended up creating a dressing room rift, damaging both player and club. Many of the older players were understandably upset that twenty-one year old Julen had been given the captaincy feeling that he was not the natural leader of the dressing room, whilst others felt aggrieved at the special status he received in regards to his salary.

Matters were made worse for Guerrero in 96, when Cádiz-born Frenchman Luis Fernandez became the manager.

There were, however, some highlights. For example, in 98, Guerrero’s fifteen goals led Athletic to second place and Champions League football for the first time since the Clemente era. In the following season, he even managed to score Athletic’s first Champions league goal in fourteen years when he struck against Galatasaray.

Despite all the successes, Guerrero became an increasingly peripheral figure thanks to Fernandez’s defensive tactics, the kinds of which would never allow a player of Guerrero’s free-spirited style to shine. Furthermore, the situation between Guerrero, his teammates and Fernandez became increasingly tense and political. It was obvious that in truth Guerrero had no place in a Fernandez side. Most likely he was only being kept in the squad out of fear of a San Mamés riot, such was his popularity.

Guerrero’s playing time diminished noticeably under Fernandez, with him playing almost one thousand minutes less in Fernandez’s final season in charge compared to his first.

When Fernandez was dismissed in 2000 and replaced by Txetxu Rojo, many had hoped the change of manager would bring back the Guerrero of old. After all, he hadn’t even turned thirty yet and was supposed to be in the prime of his career, but the damage had already been done.

The lack of playing time, the drop in confidence, his dressing room isolation, the changing world of football tactics and, eventually, the rise of Franciso Yeste took its toll on Guerrero. Even the return of the man who gave him his debut, Jupp Heynckes couldn’t restore him to his best. Heynckes claimed that football had changed and that Guerrero was failing to make the necessary changes needed in order to get back to the top level. In return, Guerrero defended himself stating that he always followed the tactical instructions of his coaches, still remained heavily involved in matches, and generally refuted the notion that the sport was passing him by.

From 2003 to the end of his career, Guerrero became nothing more than an impact sub, if that. Managers kept him as part of match day squad as a form of appeasement to the fans, but he was rarely played, and if he was lucky enough to get on the pitch it would only be for ten or fifteen minutes at a time. From Ernesto Valverde’s appointment in 03/04 until his retirement in 2006 Guerrero played a total of forty-two games, thirty-seven which were from the subs bench.

He did have a swansong, though. In 2004/5, during Ernesto Valverde’s first stint as manager, Athletic found themselves 3-0 down to Osasuna at San Mamés, before Yeste dragged them back to 3-2. With ten minutes remaining, Valverde decided to roll the dice and to much applause he threw on Guerrero.

In turn, Julen Guerrero rolled back the years inspiring his teammates to a most remarkable comeback. There was life left in this lion yet. First, fellow sub Tiko Martinez evened the score with a fine low finish. The commentators baited fate, imagine if Guerrero scored they joked…

In the 88th minute, right back Iraola put in a cross from the wing and Julen found himself ‘in the right place at the right time’ putting the ball in the back of the net to complete the comeback and spark pandemonium inside the old San Mamés.

He has described the final seasons of his career as being somewhat melancholic, the depression of going to training everyday knowing he would never be played, no matter how well he trained, had had a major affect on his psyche, and in 2006 at only thirty-two years of age, the Lion King decided to hang up his boots.

He announced his retirement in a emotional press-conference, where he was surrounded by applauding teammates. The next season, he took over as the coach of the under-16’s but poor performances saw him leave the club for good at the end of the campaign.

In his post-career, Julen Guerrero has had much success. He has since become a respected commentator and journalist. He has also steered his coaching career back on track, recently being appointed as the national under 16’s coach.

Many mistakes were made during the career of Guerrero, none more so than offering a lifetime contract to a twenty-three year old at a club he adores where managers rarely spend more than three seasons and presidents are elected every four years. It was always going to be a recipe for disaster.

Guerrero had many opportunities to leave Athletic, and if he had, he would probably be looking back on a trophy laden career right now. But Julen was both a player and man of a different class. He has always maintained that he has no regrets about staying at Athletic and that everything that happened after achieving his dream of making his debut for the club was a bonus. As he has stated, for him the undying affection of the Athletic fans is worth more than any trophy.

You’ll never find an Athletic fan questioning his talent, commitment or importance. He came along at a time when Athletic was in dire need of a hero and he more than surpassed his duties in that respect, he was an absolute inspiration. There are many who are willing him to succeed as a coach, in the hope that one day he might return to San Mamés, whether it be in a coaching capacity or otherwise. The Athletic faithful patiently wait, hoping and praying, they will get to see their king roar once more.

This article is part of a series based on Basque football made in collaboration with Row Z.

iThere are no comments

Begin typing your search above and press return to search. Press Esc to cancel.